I’m Sure This Will Create Tons Of Jobs

Our Tennessee Republican lawmakers prove once again that they are unable to focus on anything that will actually make a difference to anyone. Now they’re wasting everyone’s time proposing a law that would authorize city and county governments to post the Ten Commandments.

And I have to say, of all the issues facing Tennessee right now, the Republicans have hit on another one that is very last on anyone’s list of priorities. So, way to go, folks. Still clueless about how to actually govern, but you’re great at yanking that chain which is connected directly to the wingnut amygdala.

Here’s my question for the Tennessee Republicans: Which version of the 10 Commandments should we post? The Roman Catholic and Lutheran version? The Protestant version? The Hebrew version? The one that actually contains 12, not 10? They’re all different, you know.

What about that whole Sabbath thing? Is it Sunday or Saturday? Since we’re supposed to keep it holy, shouldn’t we have that issue resolved before we start admonishing people about what to do on it?

Do you think it’s the government’s job to decide which version of the 10 Commandments is the “real” one? How would you Southern Baptists like it if President Obama just decided it for you. Would that work? I’m guessing not.

Here’s a handy chart showing some of the major differences among denominations. And this chart doesn’t even address the half of it when it comes to different interpretations of what the commandments actually say. But, for what it’s worth: 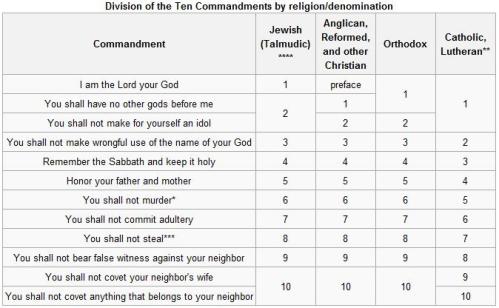 Think it doesn’t matter whether coveting your neighbor’s wife is forbidden in number eight or number seven? Wars have been fought over this stuff. Families have been torn apart, great schisms have occurred, the Reformation and revolutions. Do we want to reignite this debate? Does anyone seriously think the Anglican or Roman Catholic church wants to let the Southern Baptists decide which one is the right one?

Seriously, people? Are we really still having this conversation after how many centuries?

Here’s an idea for you religious folks: why don’t you all run off and put your pointy little heads together and figure this shit out. Once the Roman Catholics and the Jews and the Holy Rollers and the Southern Baptists and the Church of Christers and the Anglicans and the Presbyterians decide whose Scripture is the correct one, we can talk about posting it on taxpayer-funded buildings. Until then, STFU. We’ve got more important issues to worry about.