When it’s in barbecue mode, according to the article, Palin’s head appears to be “steaming with anger”: 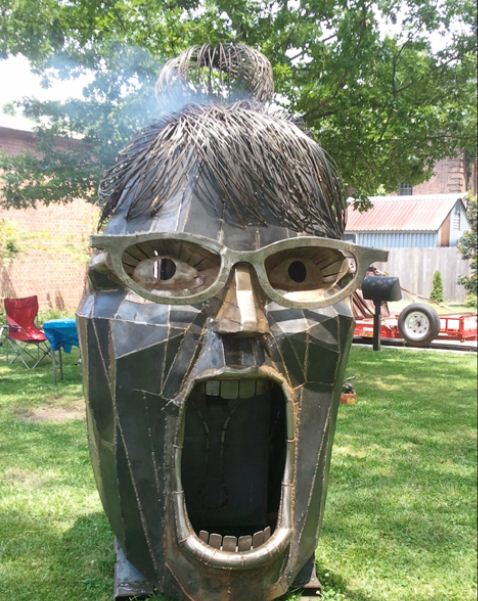 J. Taylor Wallace’s work is currently on display outside Chicago’s Bridgeport Art Center. Not surprisingly, the irony has been completely lost on the perpetually aggrieved Tea Party cult. No, they are not amused, and they have directed their inchoate, homophobic rage at the artist.

“I’ve gotten some really lovely emails, like, ‘You suck, and you’ll be the next one to burn,'” says Wallace. Here are a few choice selections from the artist’s inbox:

It is a matter of time till you are the pig, was it fun for you pig.

Enjoy your 15 minutes of fame by insulting someone. Looks more like a morph of H Clinton and R Maddow, anyway.

I noticed your work of art in the Chicago Tribune this morning. I am sure you are elated with the exposure you have received. Unfortunately, you obviously needed to accomplish this by using Sarah Palin (an easy target) as your inspiration. I hope the feminist groups in the United States take note of your efforts to humiliate a woman of intelligence, courage and leadership. The role model that these groups have promoted over the years to have the opportunity to become President or Vice President of our nation has been ridiculed by your “work of art”. I work in the art field, totally enjoy creativity, am not a feminist, and am totally not impressed by your work. I feel sorry for the people of Bridgeport and visitors that will be exposed to your art.

“Amid the hate speech, I have also been called ‘gay’ in what is I presume an attempt to insult me by a particular demographic of individuals,” Wallace says. This vehement opposition to the flavor-imparting Palin dome upset him, at first. “The point is to have a conversation…. For people to get so angry over a piece of artwork is surprising to me.”

Really? You’re surprised by this? I’m not. The lunatic fringe don’t want to have a conversation. That’s the absolute last thing they want to do. Indeed, they want to shut down the conversation. That’s the whole point, after all. That’s why their leaders talk over everyone else on shows like Meet The Press, that’s why they staged the summer Town Brawls, shouting down even the members of Congress hosting these events. That is why they are always being whipped into a frenzy, and that is why they are perpetually “steaming in anger.” The absolute last thing these people want is a conversation, because when we have a conversation reason wins. And they are the opposite of reason.

I’ve always said that art, music, comedy and literature are our best weapons against this lunatic fringe. You can’t shout down art.