• Dr. Robert Spitzer, regarded as the “father of modern psychiatry,” has apologized for his 2003 study supporting the use of reparative therapy to “cure” gays.

• California’s only known wolf in the wild, called OR7, has been photographed: 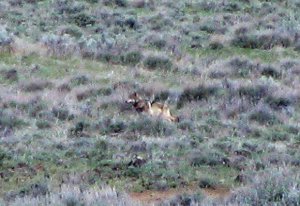 I Can Haz Girlfriend?

This is the only known color photograph of the animal. The photographer is Richard Shinn, a CA Dept. of Fish and Game employee. Quite a scoop!

• A plastic-eating fungi found in the Amazon could save us all from drowning in mountains of trash. Okay people this is why we saved the rainforest!

• Researchers at Harvard and Yale found that the average American is willing to pay a little more for clean energy, but not if the definition of “clean” includes natural gas and nuclear power. Interesting.

• A 9-year-old boy launched his own spontaneous counterprotest of the Westboro Baptist “Church” with his own “God Hates No One” sign. In so doing he became an overnight internet hero.

• Gay agenda alert! Ellen DeGeneres has been awarded the Mark Twain Prize For American Humor. The nation’s top humor prize, it is awarded by the Kennedy Center for the Performing Arts. Past recipients include Bill Cosby and Tina Fey.

• George Lucas is sticking it to his NIMBY neighbors who opposed his plans for a digital film production studio by opting to build low-income housing on his land instead. He stated:

“If everyone feels that housing is less impactful on the land, then we are hoping that people who need it the most will benefit.”

• Related: a judge has ruled that General Mills must defend its claim that Fruit Roll-Ups are made of real fruit, not the crap that’s listed on its label. Damn, I’m sick of this shit. Just be fucking honest already.

There was no good news out of Tennessee this week. None. Donna Summer died. Horse abuse was revealed. Nashville has issued its first air quality alert of the year today. Just beam me the hell up, already.

I leave you with this must-see video. It’ the TED Talk they didn’t want you to see, about income inequality and who the true job creators are. Watch and share with your friends and family: