So, last night at around 11:45 pm some kids came through my neighborhood and stole all of the Obama signs out of everybody’s yard. I was actually fast asleep when it happened but my dog started barking like crazy and woke me up. The kids then turned down a side-street to collect those signs before heading back up my street to get the rest. So that gave me time to grab my glasses and car keys and follow them. I didn’t catch them — thank God, I was in my PJs and fuzzy slippers — but I did hear them shouting and hollering and having a good ol’ time, and I got enough of a look to see they were young kids, probably College Republicans from either Belmont or Lipscomb, but I really don’t know.

Frankly, I’m surprised it took them this long. My yard sign has been up since May; normally it would have been removed at least twice by now. Some of my neighbors have had their signs up since March, believe it or not. I took the fact that our signs have remained unmolested this long as evidence of a conservative enthusiasm gap. Also, I’ve seen very few Romney signs around town, and many of the ones I have seen have been in the public right-of-way. My rule of campaign signs is this: if most of your signs are in the public right-of-way (*cough*cough*RON PAUL*cough*cough), that tells me you can’t find enough real people willing to display support. And yes, Phillip North, I’m looking at you, too.

And now I’m sure one of my conservative readers will want to tell me about their neighbor/friend/relative who had a Republican yard sign stolen. Right, “both sides do it,” yada yada. I’m not going to say that someone, somewhere, who is not serial victim Phil Parlock, never had a Bush or Romney sign stolen. But let me just say, this is now my fourth presidential election in this house, in this neighborhood. And while most of my neighbors are Democrats, there are a handful Republicans who each election display their support of the GOP ticket with a yard sign. I have never, ever, in my 12 years of living in this neighborhood, ever seen their signs stolen or vandalized.

Which tells me that College Democrats are too busy doing stuff like trying to organize GOTV and registering voters, instead of wasting their time with stupid pranks like violating citizens’ property rights and free speech. Go figure.

I really don’t understand the point of doing this, either. It’s not like we’re not all going to go out and buy more signs. In fact, I buy mine in bulk because I’m just so used to having them stolen all of the time. One sign disappears? Two replace it. In 2008 I ended up with five signs in my yard, one nailed to a tree, out of reach of thieves. I mean, it’s not like we’re not going to be even more motivated to express ourselves.

So it seems the kids are up to their their stupid pranks. Last week they decided to clean out everyone in the Belmont University neighborhood, last night it was my neighborhood. One large sign on Belmont Boulevard was brutally vandalized, just slashed in half. Incidentally, that homeowner caught the culprit on video and has filed a police report. So you kids who think this is all fun and games had better watch out. Piss people off by denying them their free speech and you’ve poked a stick at a hornet’s nest. People do prosecute this stuff because of the larger principle at stake.

Some people even boobytrap their signs. I’ve been known to place dog poop strategically nearby. So, if anyone wants to steal my yard in the dark of night, you’ve been warned. Bwaahaaa.

Also, a final message, to be filed under awesome: 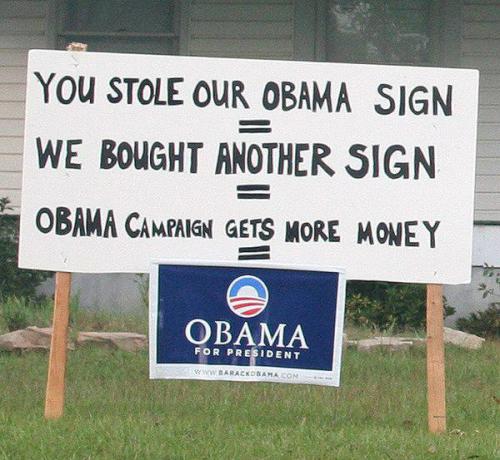