People are wondering what this whole Tucker Carlson-Matt Drudge-Fox News fail parade could possibly be about. The video is old, was well-covered in 2007 (even by Tucker Carlson!) and isn’t the shiny-sparkly game changer that had been promised.

But people, it’s not about you. It’s a wingnut dog-whistle for “reparations,” as the Fox chiron Tweeted by Salon’s Alex Seitz-Wald makes clear: 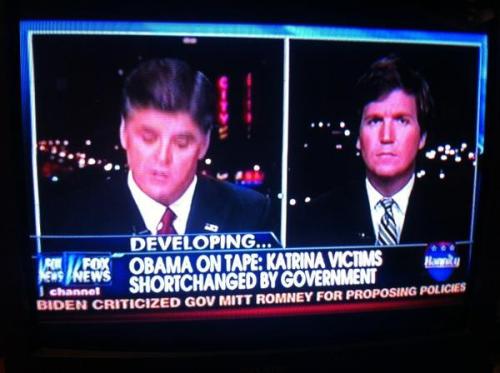 “Katrina victims shortchanged by government”? Oooooh. I get it! It’s another way of saying if Obama is re-elected, he’ll make sure black people get your money because of slavery ‘n stuff.

This is a classic dog whistle and what’s really curious to me is that it’s being used at all. Is the Fox/Drudge/Carlson crowd worred the folks to whom this message is directed — i.e., the racist base — won’t bother to vote? What do they know that we don’t?

It’s really quite puzzling that they keep throwing more red meat to the far right, the folks you’d think were pretty convinced that Obama is a danger to the republic on account of being a Socialist-Muslim-wealth-redistributing-blackety-black man. You’d think they’d be trying to appeal to the less crazy people. But maybe there are none.

Maybe there really are no undecided voters left in this election and all the Republicans can do is try keep their side motivated with crap like this.