Why I Quit Googling

In case you missed it, a couple weeks ago Google held a fundraiser for notorious climate denier/oil company shill/all around nutbar Oklahoma Sen. James Inhofe.

Considering the great lengths Google has gone to present itself as a “green” company, more than a few people consider this a gross display of hypocrisy. You simply can’t claim to have any sort of green ethos while raising money for the Senate’s most vocal and active climate denier.

And no, saying you have a data center in Oklahoma is not sufficient explanation. You don’t get off with that trite “we don’t agree with all of their policies” bullshit. This isn’t just any policy. This is a major policy on which you’ve hinged a whole boatload of your feel-good PR, and Inhofe is probably this country’s most powerful activist working to obstruct any policy action related to climate change.

You do not get a pass on this. This is not, we have a minor disagreement on this one trivial thing but can find common ground elsewhere. This is, we are galaxies apart on a major fundamental issue of cataclysmic proportions. So, fuck you, Google. We’re not that stupid.

There’s simply no excuse for this. I mean, I guess they’re bowing and scraping for some kind of favorable tax treatment or whatever? To which I again say: fuck you. How many bazillions in profits do you people need, anyway? I just don’t get Corporate America, I really don’t. You’re all, oooh we want Americans to love us and feel good about us! but you act like such dicks all the time, spending bazillions of dollars on lobbying and PACs and greenwashing and PR campaigns and fundraising for asshole Republicans and groups like ALEC which support legislation that oppress your customers. Why not just spend all that money on doing the right thing in the first place? Instead of spending money on being assholes and then spending more money on a PR/marketing campaign trying to convince us you’re not assholes?

Wouldn’t that just be easier?

Anyway, comedian Andy Cobb put together a hilarious video clip mocking Google for its hypocrisy. Give it a look-see:

I use search engines when looking up stories for my weekly gun report, and about six weeks ago I noticed that suddenly a news search for something like, “gun accident, Memphis” would yield a whole string of Daily Caller stories having nothing to do with guns, accidents or even Memphis. Don’t believe me? Look, this is Bing’s search:

And this is Google’s: 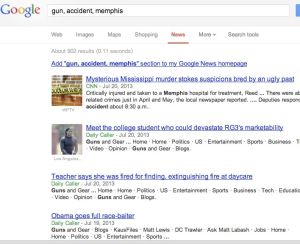 If you click on the picture you’ll see that other than CNN’s top story, the rest is some Daily Caller BS that has nothing to do with what I’m searching for. (Daily Caller is that far-right rag Tucker Carlson started which peddles wingnut crack. Notorious for firing and missing, repeatedly, we’ve nicknamed them the “Daily Failure.”)

Anyway, I’m not tech-savvy and I can’t pretend to understand all of the algorithms and other crap which goes into making a search engine do its job. I’ve heard of Google Bombing and all that, so I’m gonna guess the people at Tucker’s Daily Failure embedded some SEO terms in their codes or whatever it is they do to make sure anyone searching for “guns,” “Tennessee” and maybe some other redneck-y sounding terms will land on Tucker’s Little Shoppe Of Internet Rumours.

Anyway, that ain’t working for me so I switched to Bing. So far, no problems.

You know, I’m not naive. Despite Corporate America’s Herculean efforts to put forth a huggsy-wuggsy image and to make sure its Twitter feed is full of Nice Time, I know they’re all evil to some extent, the difference is just in degrees. And I can handle some evil, it’s part of life in America today. But when you become both evil and you stop working? You’re dead to me.

21 responses to “Why I Quit Googling”