Remind Me Again How “Liberal” Chris Christie Is? 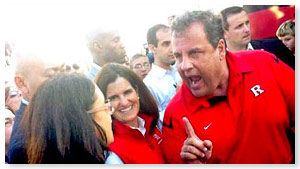 But here’s what I saw. After the rally, Christie made his way back to his campaign bus, flanked by low-key security guards. Tomlinson, who had been carrying a sign and handing out fliers from her Badass Teachers Association, asked Christie why he’d called New Jersey schools “failure factories.” Christie rounded on her, blurting out that he was sick of “you people.”

And check out the smug grin on his wife’s face. Of that, Weigel writes:

Mary Pat Christie smiled through the entire talk-off. Why? Because a local NBC News camera was facing her, capturing the scene. Two days later, I don’t see any trace of the video online. Is that a statement on how ordinary the confrontation was? Possibly.

Honestly, “you people”? Really? Let’s remember, this isn’t the first time Christie has blown his stack when confronted by citizens who oppose his anti-teacher agenda.

I don’t get these people who keep telling me that Christie is “really” a Democrat. No, he’s not. He’s another anti-choice, anti-union, privatize-everything asshole. And he’s a bully and a blowhard.

We’ve talked a lot about how right-wingers like a “tough guy.” I’ve mentioned before my Wingnut Friend™ who bemoaned before the 2008 presidential primaries that he “just wanted someone who can kick some ass!” That’s of course all they want: someone filled with a lot of hot air and bluster, who can give voice to their inchoate rage and dissatisfaction. Christie fits that bill nicely, which is why the murmurs of disappointment over Christie’s dropping his anti-gay lawsuit and making nice time with President Obama after Hurricane Sandy won’t amount to squat. As long as someone reflects the right’s anger, it doesn’t matter.

But for God’s sake, liberals. Stop giving Christie a pass. Christie, as Salon has pointed out, is playing on the oligarch’s team. It amazes me how readily people will label someone a “populist” just because they talk like one.

I don’t see anything “populist” in wagging your finger in a public school teacher’s face and yelling, “I’m sick of you people.”

14 responses to “Remind Me Again How “Liberal” Chris Christie Is?”