They don’t have to win the argument, they just have to “foster doubt”:

Historians and sociologists of science say that since the tobacco wars of the 1960s, corporations trying to block legislation that hurts their interests have employed a strategy of creating the appearance of scientific doubt, usually with the help of ostensibly independent researchers who accept industry funding.

Fossil-fuel interests have followed this approach for years, but the mechanics of their activities remained largely hidden.

“The whole doubt-mongering strategy relies on creating the impression of scientific debate,” said Naomi Oreskes, a historian of science at Harvard University and the co-author of “Merchants of Doubt,” a book about such campaigns. “Willie Soon is playing a role in a certain kind of political theater.”

Environmentalists have long questioned Dr. Soon’s work, and his acceptance of funding from the fossil-fuel industry was previously known. But the full extent of the links was not; the documents show that corporate contributions were tied to specific papers and were not disclosed, as required by modern standards of publishing.

Dr. Soon is yet another of those “ostensibly independent researchers who accept industry funding.” He’s actually an engineer, not a climate scientist, and real climate scientists say his research is “pointless” to their work. But he’s got the veneer of authority, because he is associated with the Harvard-Smithsonian Center for Astrophysics. And corporate shills in Washington (*cough*cough*Sen. James Inhofe*cough*cough*) who think we should be impressed by this pedigree trot him out to promote their “the jury is still out because of this guy here” parlor tricks.

So okay, buh-bye Dr. Soon. You violate scientific ethics, you lose your gig. Soon’s research was funded by the Charles G. Koch Charitable Foundation and the Southern Company (a utility holding company). And then there’s this:

However, other companies and industry groups that once supported Dr. Soon, including Exxon Mobil and the American Petroleum Institute, appear to have eliminated their grants to him in recent years.

As the oil-industry contributions fell, Dr. Soon started receiving hundreds of thousands of dollars through DonorsTrust, an organization based in Alexandria, Va., that accepts money from donors who wish to remain anonymous, then funnels it to various conservative causes.

Um, yeah. So a change in the funnel through which the cash flows. But the source remains the same. This is dirty pool. And I can’t imagine, with the bazillions of dollars spent on these propaganda campaigns and astroturfing and buying of elections, that this all makes financial sense for a corporation in the end. Wouldn’t it just be easier and cheaper to do the right thing from the get-go?

This meme from last year has always cracked me up: 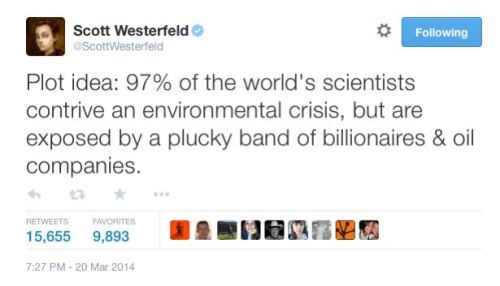 Last I checked, it’s not 97% — it’s 99%. And for every Dr. Soon exposed as a fraud that percentage grows. But remember, it’s not about “disproving” climate science. It’s about spreading doubt. It’s about perpetuating the false belief that “the jury is still out,” and “the science isn’t decided.”

Clever, but facts will out. This shit never works. Because what you say doesn’t change what is really happening. Sea levels are rising. Droughts are happening. Islands are disappearing. What some wingnut in Oklahoma thinks isn’t going to change that. And pretty soon these chickens will come home to roost on your street. Indeed, they already have.