Dear American Airlines: please stop sucking. I’m really, really tired of you people sucking. Seven years ago I complained about how much you sucked and guess what: you still suck!

This trip we were stuck for four hours in an aisle with no window. I don’t mean we didn’t have a window seat, I mean the plane physically had no window on our aisle, something we did not know was even possible on a 737. I’ve certainly never seen such a thing before, but just to prove it, here’s a photo: 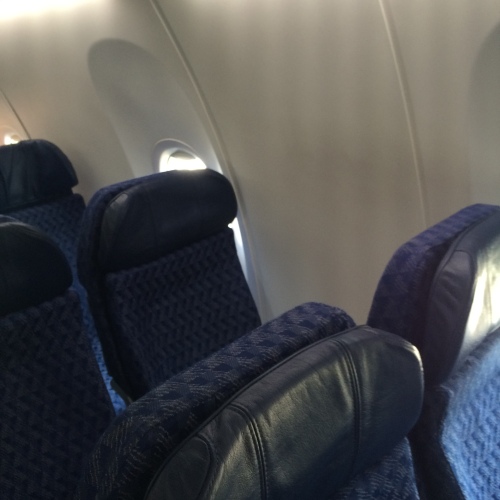 I was very puzzled about why our row didn’t have a window. When I pointed it out to the flight attendant she looked at it and said, “Oh. Huh! Weird.” And walked away.

Not to sound petty, but four hours in a cramped cabin with no window was pretty excrutiating for me. But more to the point, I was unhappy that we paid the same for our windowless seat as we would have if we’d had a window. Seems like if you’re stuck in cargo you should at least get a discount. Even worse, when we picked our seats, the online diagram made no mention of the fact that these were windowless seats. Seems like that might be some information you’d want to share with your customers.

I’m still not sure why we didn’t have a window. Maybe someone in the airline biz can explain it to me. Via Twitter I was told that there is a ventilation/air conditioning duct on this part of the plane so it’s not possible to have a window here. That’s fine, but you’d think they’d have the ability to tell people this ahead of time.

But when I complained through their customer relations department, I got a very bizarre email that blamed “the economic realities of our business” and “competition” and low-cost carriers like JetBlue:

I regret the seat you were assigned did not have a window in that row. Unfortunately, the economic realities of our business just won’t allow us to make drastic cabin changes with regard to seating. Because of competition between all airlines, we must use each airplane as efficiently as possible. As low-cost carriers and other major airlines make use of all available space aboard their planes, we must be competitive and do the same.

OH. So in other words, I might as well fly a low-cost carrier because my experience is going to suck just as bad on American. Is that what you mean? Because that’s what you’re saying.

So, duly noted, folks. I’ll definitely keep that in mind for future air travel. After all, I have my own economic realities to take into consideration.