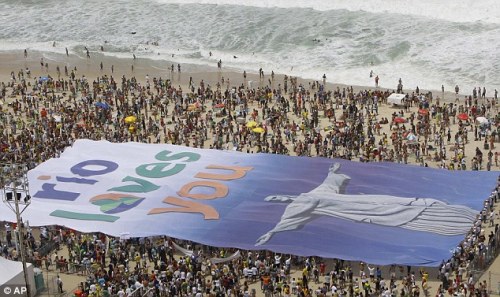 As longtime friends of the blog know, Southern Beale is a huge fan of the Olympic Games. I always have been. Some of my fondest childhood memories are of the entire family gathered around the TV in our den watching the games. There have been so many great Olympic moments forged in my memory: Peggy Fleming’s stunning performance at the 1968 Winter Games in Grenoble, France, Mark Spitz winning his record-breaking medals at the tragic Munich games, Olga Korbut and Nadia Comenici. Of course, there’s Team USA’s Miracle on Ice, and the amazing athleticism of Usain Bolt…. I could go on.

So I don’t come by this lightly when I say the Rio games should be called off, moved, events relocated elsewhere, replaced by something else, whatever.

As the New York Times reports,

On June 17, fewer than 50 days before the start of the Games, the state of Rio de Janeiro declared a “state of public calamity.” A financial crisis is preventing the state from honoring its commitments to the Olympic and Paralympic Games, the governor said. That crisis is so severe, he said, it could eventually bring about “a total collapse in public security, health, education, mobility and environmental management.” The authorities are now authorized to ration essential public services and the state is eligible for emergency funds from the federal government.

The Times used the word “catastrophe” to describe the coming games, and it’s hard not to agree. Construction is nowhere near complete for the many facilities that will house Olympic events. Some of those that have been completed have already fallen apart. There’s raw sewage and garbage floating in the water where water sports and boating events are planned. There’s the Zika virus. The Russian doping scandal. Body parts washing up on the site where the beach volleyball competition will be held.

The entire thing is a disaster and a huge embarrassment for the IOC, which picked Rio de Janeiro to make history: South America has never hosted an Olympic games, and back in 2009 Brazil was the continent’s economic powerhouse:

Unlike much of the world, which is still extricating itself from recession, Brazil’s economy is expected to grow by between 4% to 6% next year. The country is helping propel Latin America out of recession, according to a forecast released Thursday by the International Monetary Fund.

Brazil’s economy has benefited from strong demand for natural resources such as ironand timber and crops such as sugar cane and soybean. The discovery of major offshore oil deposits is expected to make it a major energy exporter by 2012. And under Lula, the government seems to have broken a cycle of hyperinflation, currency devaluations, bank failures and credit crises.

There was also the hope that the Olympic Games would push the government to address some of Rio’s long-ignored problems: the crushing poverty of the favelas, environmental pollution, crime fueled by the illegal drug trade. As has become obvious, that didn’t happen.

So, the IOC needs to pull the plug. The Olympic Games serve as the host city’s international coming-out party. It’s a major PR coup, the impetus for thousands of glowing news reports about how wonderful your city is. It’s the spark for a city’s tourism boom. And frankly, Rio doesn’t deserve it. They’ve failed to address the systemic issues that plague their city. They failed to adequately prepare for their coming-out party. They have acted like being awarded the games was the goal, while the actual “hosting” part was something some other city was going to do.

This is all on the IOC, which continually awards the games based on every criteria but the logical one: which place can best pull off an event of this magnitude.

As an aside to all of this, remember how conservatives cheered the IOC’s selection of Rio over Chicago, just to spite Obama? Remember this?

Yeah, how’s that working out for you guys? The Summer Games in Chicago would have been the perfect farewell to the Obama presidency. But of course, it’s not always about us. America has hosted more than its fair share of events. But the IOC needs to stop giving these huge international events to cities out of some kind of aspirational hope that magic will happen and the toilets will all work.

14 responses to “Cancel The Rio Games”