Funny, I was thinking just yesterday that we were coming on the date for another of Christian crackpot Harold Camping’s Rapture predictions. So I did a little Googling and learned that yes, tomorrow is the revised date. Am I good or what?

Camping seems to have dialed things back a notch since his last end-times prediction went down in flames. This made me laugh:

“I really am beginning to think as I’ve restudied these matters that there’s going to be no big display of any kind,” Camping said. “The end is going to come very, very quietly.”

What if there was a Rapture and nobody noticed? Ha ha ha … funny thought. Well look, folks, there’s no escape hatch. The rapture is not Biblical. It’s a fantasy cooked up by a previous century’s crackpots. No one’s going anywhere.

To quote Don Henley, there is no more new frontier, we have got to make it here. There’s no Rapture magically beaming the holy out of this hot mess we’ve created. We have to figure this stuff out for ourselves. And that’s kind of the point of the Gospels. You want to be a good Christian? Learn to get along with your neighbor. Jesus would have wanted it that way.

Anyway, I’ve made plans for Saturday (and unlike last year, it does not involve a birthday party for toddlers.) I just have a feeling we’re all gonna still be aroumd.

Because You Can Never Be Too Prepared For These Things

Hey folks, with the Rapture just a few weeks away, have you thought about what you’d do if all this Dominionist Christian theology actually turned out to be true?

I’m not talking about your immortal soul and accepting Jesus Christ as your personal Lord and savior. I’m talking about those loved ones left behind — namely, your pets.

Thankfully, while you’ve been off selfishly at Bible study or proselytizing to your friends and neighbors before the big day, someone has been thinking about these loyal companions. According to some folks’ theology, Fluffy and Fido won’t make it to heaven because they don’t have souls. Hard to believe, I know: you’d think a lifetime of selfless and undying devotion no matter what you look like or what an asshole you are would grant them entry into the Afterlife. Sadly, no.

Fortunately, a wonderful new service has been created: After The Rapture Pet Care. Now this is what I call entrepreneurship!

Here’s how it works: for a one-time fee of $10, Christians can register their pets with After The Rapture Pet Care (the fee is supposed to deter fake accounts). Then when the Rapture happens, the After The Rapture network of non-Christian/atheist pet caretakers is activated. And you can rise up, secure in the knowledge that some heathen, animal-sacrificing Satanist lovely non-believer will care for your pet after you’re gone.

Of course, if they don’t, you’ll have no way of knowing since you’ll be spending the rest of eternity worshipping Jesus. And you’re not allowed to meet your pet caretaker pre-Rapture because of confidentiality concerns. But at least you tried to do the right thing and who knows: that could be the final good deed to push you over into the “saved” column!

And for those non-believers who want to sign up to be volunteer pet caretakers: have at it! You might be able to get a really cool car or big screen TV into the bargain. Why not? It’s not like the newly-Raptured Christians are going to use them.

Seriously, I’m pretty sure this has to be a hoax or a scam, although they claim it’s not .

Are You Rapture Ready? 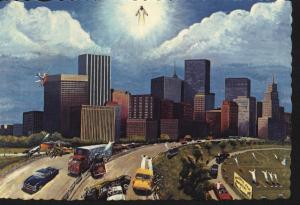 Apparently some Christians say the rapture will happen today. According to this website, it’s going to be like a big huge wedding in heaven, though everyone left on earth will have a hard time of it.

Rapture date-setters have been pwned before, of course. Still, can’t hurt to look busy today.

Comments Off on Are You Rapture Ready?

>It’s the end of the world as we know it, if some folks have their way. On the Conservative Christian end we have church leaders like Pastor John Hagee, convinced we must restore the Jewish people to the Holy Land so Jesus will return on a white cloud:

Pastor of the 18,000-member Cornerstone Church in San Antonio and a world-reknowned TV evangelist, [Pastor John] Hagee organized the lobbying blitz (the second in two years) to try to exert political power in Middle East policy, including consideration of a pre-emptive strike on Iran.

Scary stuff, especially when you remember that Pastor Hagee has the ear of the White House, and he’s leading them right where they want to go. Hagee wrote a book about how an invasion of Iran was prophesied in the Book of Esther, and he’s doing his darnedest to make sure it happens on his watch. Yikes.

On the left side of the aisle, I’m getting inundated with scary e-mails warning of a pending apocalypse due to Peak Oil, President Bush’s Presidential Directive #51, FEMA’s REX-84 plan, etc. Either way, civilization as we know it is over, get yourself educated on permaculture, buy some land out in the country, move to Canada. etc.

Someone pass the popcorn.

Once upon a time we had crackpot evangelists predicting the end of the world at every turn. The Jehova’s Witnesses have made nine apocalyptic predictions, none of which happened. Maybe they’ve given up. In the ‘80s one Christian leader said the Africanized or “killer” bees dominating the news at that time were a sign of the Rapture. This year we had some Christians saying the massive, worldwide die-off of honeybees are a sign of the Apocalypse.

I love my liberal friends but I wish they’d quit telling me all the reasons why Peak Oil is real and there’s not a damn thing we can do about it. The world has run out of oil, they say, and because the world is dependent on oil, there will be massive riots, food and water shortages, chaos in the streets, etc. It’s “Mad Max” without a cute guy in leather. These are some of the most hopeless voices of despair I’ve heard; at least the Christians are telling me I can get to heaven if I repent.

Now I’m getting hysterical e-mails from friends telling me about how President Bush is going to declare martial law, after finding a reason to invade Iran. Excuse me if you’ve heard this one before … in Oct. 2006 (the John Warner Defense Authorization Act of 2007) … in 2005 (bird flu) ….in 2004 (elections cancelled) … in 2002 (internment camps) … Etc. etc.

I no more buy these dire predictions than I believe the Rapture is imminent, or would be if only we’d invade Iran, prompting nuclear annihilation so the handful of Jews left on the planet could return to the Promised Land … and convert to Christianity. Apocalypse, fuck yeah! It’s the awesomest!

Tell me, does any of this make sense to anyone? Who thinks that Mr. Commander Guy Of 27% has enough support anywhere in this country to seize control of the government and declare martial law, rounding up the liberals and placing them in internment camps? That’s just silly.

I think we’re so programmed for fear in this country that we’re starting to go a little nuts. The news media is telling us to be scared of everything, including our shadows. I mean, for crying out loud, two weeks ago I saw a TV news report warning in ominous tones how running might be dangerous for your kids! Running!

Come on, people. Calm down. The apocalypse ain’t comming any time soon.

And if I’m wrong, you are all free to mock me until the end of day(s).

Comments Off on >Apocalypse Wow!

Filed under apocalypse, end of the world, peak oil, rapture