Pearls of wisdom from our corporate overlords at the American Enterprise Institute. You can’t make this shit up:

In a world of scarce resources, a slightly higher mortality rate is an acceptable price to pay for certain goals — including more cash for other programs, such as those that help the poor; less government coercion and more individual liberty; more health-care choice for consumers, allowing them to find plans that better fit their needs; more money for taxpayers to spend themselves; and less federal health-care spending. This opinion is not immoral. Such choices are inevitable. They are made all the time.

Consider, for example, speed limits. By allowing people to drive their cars at speeds at which collisions result in death, our government has decided that the socially optimal number of traffic fatalities is not zero. Some poor souls die: There were more than 30,000 traffic fatalities on America’s roads in 2013. If we didn’t accept that risk, we’d lower the speed limit to a rate at which accidents simply don’t kill, such as 10 mph. Instead, we’ve raised it periodically over the years, and you can now go as fast as 85 mph on a few highways.

Collateral damage, y’all. Well, I suppose if you overlook the fact that we do lower speed limits all the damn time (in places like school zones, neighborhoods, construction zones, high-density pedestrian areas, etc.) AND if you blithely avoid acknowledging that the auto industry spends bazillions (and the government mandates) safety measures like air bags and seat belts etc. etc., not to mention mandatory insurance coverage for when accidents do happen, if you ignore all these and dozens of other things you might have a point. But since I won’t, you don’t.

You, sir, win the Failed Analogy Award of the year. You’re also an asshole. And a sociopath.

God these corporate idiots and their free market fairy tales. And yet, they’re always the first ones to go whining to the courthouse when something happens to them and their precious darlings. Just Go Galt on your freedom island already and leave running the country to the rest of us who have some common sense.

BTW, no discussion of the American Enterprise Institute is complete without providing a list of who they represent.

Compassionate Conservatism Is Dead, If It Ever Lived

Yesterday Gov. Bill Haslam decided not to veto a bill that criminalizes women who use drugs while pregnant, over the strenuous objections of women’s rights and healthcare professionals. Opponents said the law will actually deter drug dependent women from seeking treatment.

Under the law, prosecutors can charge pregnant women with assault if they use drugs that harm the fetus. Vessels, ladies.

Meanwhile, the state of Oklahoma — last in the news for actually making it illegal for a municipality like Oklahoma City to raise the minimum wage — presided over the botched execution of convicted killer Clayton Lockett, who writhed in agony, clenched his teeth, and even sat up to say “man, something’s wrong” before dying of a heart attack 43 minutes later.

Oklahoma was using an untested and unproven chemical cocktail to perform the execution, since the drugs previously used have been withdrawn by manufacturers who oppose the death penalty. Free hand of the market, etc. etc.

Oh and by the way, this was Oklahoma’s second botched execution this year.

I am reminded that the Tennessee legislature celebrated Holy Week by voting to keep secret its lethal injection method, as well. Because things done in secret are always okay, amiright? 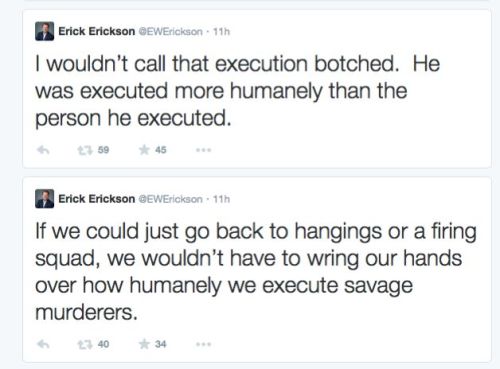 Meanwhile, last week Sarah Palin thought her team had come up with a real humdinger of a zinger when she told the NRA’s national convention,

“Well, if I were in charge, they would know that waterboarding is how we baptize terrorists.”

Blood-lust, much? The viciousness, inhumanity, and cruelty displayed by the right in such a short period of time is astonishing. It appears sadism is the new black for your modern Republican Party. That’s certainly the message I’m getting loud and clear.

Can someone please tell me why Megan McArdle has a job?

I know, it’s a question we on the left perpetually ask. But here she puts the “ass” in morass while wading into the Jerry Sandusky swamp:

McQueary grew up in State College; his family was friends with Sandusky, and of course, Sandusky had coached him. Paterno had worked with Sandusky closely for years. And if you think about what you would have done in a situation where you caught someone you love and respect in that position, is it really so obvious, as the chest thumping punditariat proclaims, that you would have leaped into the shower, beaten the snot out of him, and frog marched him to the police station after you rescued the kid? Really? You’d have done that to your father, your favorite uncle, your best friend, a beloved mentor?

Yes. Hell yes. Raping a 10-year-old boy in a shower? Oh my GOD, yes. This isn’t a moral gray area. This is assault on a child.

Think about what that really entails: overcoming all the shock and horror, the defensive mechanisms that make you question what you’re really seeing. The total destruction of a long relationship as soon as you name it out loud and accuse him to his face. The actual physical logistics of grabbing a naked sixty year old man, detaching him from that child, and then pounding on him for a while as a ten year old you don’t know watches. The fact that the minute you go to the police, you will have utterly ruined this man’s life: he will be jobless, friendless, and branded as the worst sort of pervert by everyone in the country–oh, and also, in protective custody so that the other inmates in jail don’t, like, kill him.

That’s a pretty huge emotional hurdle to leap in the ten seconds or so that McQueary had to do the right thing. Isn’t it quite understandable that your instinct might be to get away? To look for some way that didn’t have to involve jail? Wouldn’t it be a huge relief to tell your superiors and let someone else take care of it?

What fucking world do you live in, lady? This just explains so much about McArgleBargle. That something as clear-cut and flat-out-wrong as anally raping a child should somehow become morally ambiguous as she tries to place herself in Mike McQueary’s shoes… I’m just dumbfounded that she’d even go there.

I guess we should give McMegan some props for at least giving empathy a shot, I’m just shocked that it’s for Mike McQueary. It’s not like we’ve seen her walk a mile in the shoes of someone who’s been unemployed for months, or was sold a crap mortgage by CountryWide, or has gone 10 rounds with their insurance company and still denied benefits, or any of the other people I personally hold empathy for. Weren’t we just reading that conservatives are sociopaths? I’m starting to think it’s true.

Look, maybe it’s how I was raised, but when I see a crime in progress, I’m going to try to stop it. And if I catch my coworker in the act of something like raping a kid, I’m not going back out of the room, tell a superior, and then be all like “bygones!” when I still see the guy around the office. I’m going to stop the act and then I’m blowing the whistle.

And then McMegan plays the “Nazi Jews in Germany” card. Only 1% of Germans sheltered Jews in danger, she says, which just proves that everyone claiming they’d stop Jerry Sandusky in the act is lying. She goes on:

Oh, well, that’s an extreme example, you may say; McQueary was at no risk of life and limb. Fair enough, but one can name dozens of less dangerous situations where only a small minority actually does the right thing, but everyone believes that they woulda.

When you find out that someone you know is a pedophile, that doesn’t erase your knowledge that they’re also a human being. It does in the public mind, of course, but it’s very different when you know them.

As Edmund Burke famously said, “All it takes for evil to triumph is for good men to do nothing.” And for columnists like Megan McArdle to sympathize with those who stood by with their hands over their ears and eyes.

Here’s a deep thought: despite all of our flaws, human society is actually getting better. Take the long view — long in human terms, at least — and you will see that for the most part, we’ve been on a long march from brutality towards enlightenment. Less than 150 years ago, fellow human beings were held as property in this country. Just a few hundred years ago, watching two men beat each other to the death was considered entertainment — the equivalent of going to the multiplex or catching a football game. When I get depressed about the human condition I remind myself that if you take the long view, things are actually getting better. We still have a long way to go, but we have come a long way. The arc of history is long, but it tilts toward justice.