When Your RW Media Bubble Backfires

It’s a matter of course that every election, Republican politicians will complain about the “liberal media” being unfair to them. In fact, it’s so ingrained in the conservative zeitgeist that the media is “liberal” and therefore “bad” that years and years ago they were inspired to launch their own “conservative” alternatives. And all was well and good, until it wasn’t. Because conservative spin which is factually wrong doesn’t help conservatives. In the long run, it hurts them.

Those chickens have been coming home to roost for quite a while now, creating an increasingly embarrassing fail parade for the Republican Party. The conservative echo chamber gave rise to the Tea Party, it gave us climate change denialism and birtherism and Sarah Palin and Clint Eastwood yelling at an empty chair representing the right’s fantasy Obama. It gave us “unskewed polls” and Karl Rove and Newt Gingrich going on national TV to explain how Mitt Romney was going to win in 2012, guaranteed. And it gave us the embarrassment that is Donald Trump.

And it’s this last bit which has finally woken some folks on the right up. Not just the National Review, which recently ran a column about how the conservative echo chamber hurts conservatives (though even this piece seems to have missed the point a bit), but right-wing radio hosts like Charlie Sykes of Wisconsin, who was interviewed by Business Insider’s Oliver Darcy and made this very astute observation: 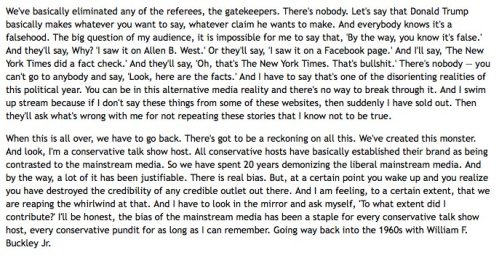 You know, sometimes facts do have a liberal bias. And when you demonize all of your fact-checkers, your “gatekeepers,” you’ve basically normalized the tin-foil hat conspiracy theories and other nonsense. These are your new facts, and you are as married to them as your audience is because you have no other way of rebutting it. You’ve painted yourself into a corner.

In short, you keep people in the dark and feed them bullshit for so long, all you end up with is a bumper crop of mushrooms.

9 responses to “When Your RW Media Bubble Backfires”